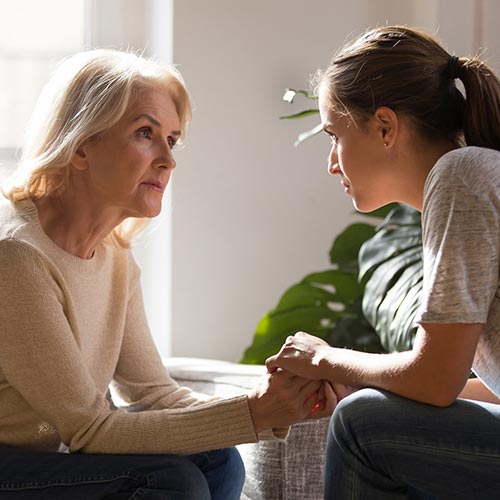 My mom recently told me something that my siblings and I did during a very difficult time in her life that apparently left more of an impression on her than it did me. She was in her room, and the five of us kids walked in together, lined up from the oldest, who was about 15 years old, to the youngest, who was 9. My mom looked at us all, wondering what was going on.

My sister, who was the oldest, spoke, “Mom, we’ve been talking, and we’ve decided that you need to go for a walk.”

This wasn’t exactly what my mom was expecting to hear, but she decided it was probably good advice. And she went for a walk.

How Do We React to Feedback?

As kids, we were giving my mom some feedback. She didn’t have to accept or act on it, but she did. In our personal and professional lives, we get feedback all the time. A lot of the feedback we receive is simple and really doesn’t require us to debate what to do with it. If somebody tells me I have spinach in my teeth, I will likely experience some slight embarrassment, be glad that they told me sooner than later, and try to fix the issue as quickly as possible.

On the other hand, if somebody tells me that I have no sense of style, a few things will probably go through my mind.

Other things may cross my mind as well, but ultimately, I’m trying to decide what to do with the feedback.

Approach professional feedback as a moment of exploration. You don’t have to agree with all of the feedback you receive, but don’t immediately disregard it either. Let it sit for a couple of days if necessary. Then consider the feedback alongside your current responsibilities and career aspirations. Consider what truth exists in the feedback. Even if you feel like you’ve been misunderstood or perceived incorrectly, that doesn’t change how others feel or perceive you. It may be beneficial to focus some effort on addressing the feedback so that others see you trying to act on an area they think needs to be addressed.

Consider Why it Was Given

Having that framing in mind can make it a lot easier to seriously consider the feedback, without taking it personally. That puts you in a more objective mental frame of mind. Another point that can help you be more objective, is to also recognize that you are not the first person to receive constructive feedback or have a perceived deficiency addressed. Other people have probably received the same feedback that you did.

Hopefully, you get curious as you explore your feedback. Now, as you explore and consider professional feedback, pay particular attention to what may actually have an impact on your current role and future aspirations. Also remember that the feedback is a window into the values of the feedback giver, and that you’re not the first person to receive this feedback. That will make you more comfortable as you move to the next step, which is to share the feedback with others. We’ll address that topic further in Part II of this article.