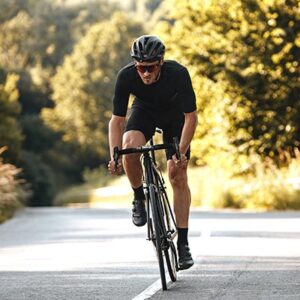 Shortly after moving to Arizona I noticed more people riding road bicycles than I had ever seen in Utah or Idaho. Talking with my retired uncle I found out he rode his bike several miles a day, multiple times a week. It got me thinking that cycling is something that I could do. On a whim I went to the local bike shop and purchased a used bike for $200. That was the amount I was comfortable losing if I didn’t end up riding the bike. It turned out that cycling is something that I enjoy!

Reaching The Next Level

I put over 2,000 miles on that bike and replaced many parts as they wore out over time. This past year I felt that I had reached the maximum potential I could with that bike and purchased a brand-new bike that was several tiers better than my original bike. While the owner of the bike shop was adjusting my new bike to fit me, I asked him how I could improve. I knew the new bike was lighter and had far superior components but that alone wouldn’t make me much better. There is a saying in cycling that to get better you need to ride “up grades” (hills) and not “upgrades” (new parts). The shop owner suggested that I focus on increasing my cadence. As I focused on increasing my cadence while cycling, I also wondered…what would it mean to increase my cadence in regard to feedback?

In cycling, cadence is the rate at which your pedals turn, specifically, how many revolutions per minute. In the beginning I just tried to make sure that I kept pedaling. I would get tired and realize that I was just coasting and not pedaling. As I started to focus on pedaling, I noticed two things change. First, I noticed that it helped to always keep my feet moving. It seems odd, but at times I would forget to pedal. Second, as I continued to pedal, I could tell what a comfortable cadence felt like. I could adjust my gears up and down to help my feet to keep moving. The key to maintaining your cadence while climbing is shifting gears to allow you to keep your feet moving. Wait too long and you lose momentum while making it difficult to return to your previous cadence. I noticed as I paid attention to shifting gears that I was able to increase how fast my feet were moving.

Ignoring your cadence in feedback is like only paying attention to feedback when you have an annual review. You might only have annual reviews and then coast until the next one. Or you might have struggles throughout the year with no feedback in between. Feedback helps you shifts gears and keep your cadence the same. Without feedback you might be climbing a hill and not realizing that it is time to shift gears. That moment you receive feedback and act on it allows you to shift gears and continue forward at the same cadence. We want a consistent cadence. We want to continually ask for feedback, figure out what we can change, and then act on it.

Don’t think this has to be a formal process because it doesn’t. Remember that you generally want to take on small changes at a time so that you can master the skill of ACTING on feedback. If there is a certain task that you are not confident in completing then next time you do said task, ask for feedback on it. It is possible that you are not confident because you have never received feedback. You will either get validation that will improve your confidence, or you will get feedback that will allow you to act and be confident the next time. Make the choice to seek feedback as part of your daily interactions with people, and you will see your cadence increase.

If you don’t have a feedback cadence established, I encourage you to start. Look for opportunities to ask for feedback frequently and then act on it. Showing that you are able to receive feedback and ACT on it allows others to recognize your potential. This is a desired skill that employers want to see in their employees and will aid in your advancement.