Early in my career, I had four consecutive bosses comment, “I need another Michael.” I took that as a real compliment and very much appreciated it; however, my one complaint—especially with the first boss to say it—was regarding the timing.

In that particular case, I was a research assistant to a professor in my second year of grad school. The year was almost over, and I was about to graduate with my master’s degree in information science. The professor made this comment to the department secretary who would be helping him find a new research assistant for the next year. The department secretary later shared the professor’s comment with me.

The Stress of Not Knowing

I really appreciated hearing that feedback, especially because I had been stressing the whole year about whether I was doing a good job or providing the kind of assistance the professor was expecting. In general, he would ask for some material or research. I would work on the task and send him what I thought he wanted. He would respond with an email thanking me for the material, but with no commentary on its fit for his purposes. I never knew whether what I was providing was meeting his needs.

My Responsibility to Ask 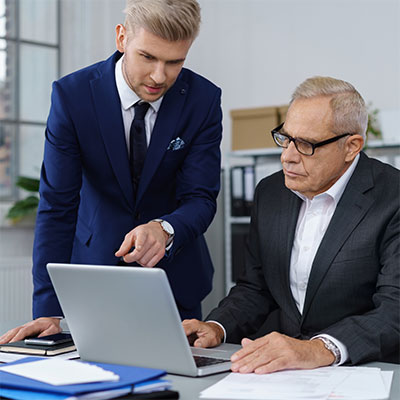 Admittedly, I certainly could have asked the professor at any point if the material I provided met his needs, instead of just hoping he would tell me. Being young and feeling the power distance in the relationship, I think I was afraid to ask. In part, I was nervous that he might tell me that I wasn’t delivering what he needed.

Of course, it is easy to see now that I should have asked. If not for the sake of my own peace of mind, then I should have asked simply to make sure we were being effective in our efforts together, and that my work was contributing in a meaningful way. But I didn’t have that perspective at the time.

LearningBridge’s founder, Glade Holman, teaches about four different stages relative to feedback receptivity. (If you have a chance to attend one of Glade’s webinars in which he discusses these stages, I highly recommend it.) In that early part of my career, when I worked as a research assistant, I was in “Stage 1: Low Confidence.” In this stage, the reassurance that comes from a comment like, “I need another Michael,” is huge. It is also the type of information that would have increased my confidence and helped me be more open to any potential criticism of my efforts. When people are more confident in their standing with their manager or the organization, it is easier to accept criticism as a critique of a particular performance and not as a critique of who they are as a person.

The Value of Regular Feedback Opportunities

At LearningBridge, we use the EOS model for company operations. Part of what I really like about this system is that managers and their employees have what are called “quarterly conversations,” which give the two parties a regular opportunity to discuss and make it very clear how the manager perceives the employee’s contribution to the team. The manager also learns if they need to support the employee differently. With this system, the need to let an employee go due to their performance will never be a surprise to either party. That means we can rest assured that even when negative feedback comes it is not the end of the world. It is simply a signal that we need to address a specific area.

Sarah Guay of HEMIC was a guest on our podcast Simply Feedback, and she shared a very interesting story of a time she received feedback. I recommend listening to it. You will hear the valuable lessons that Sarah learned about the importance of the timing of feedback.

What You Can Do

If you are an employee who wonders whether you’re meeting your manager’s needs, ask them. Regardless of whether their response is positive or negative you will have information you can use. Plus, your being proactive in asking will likely generate additional respect from them.

If you are a manager, consider what kind of feedback you give your employees and how often. Do they know that their contributions matter? Do they hear that on a regular basis? Providing feedback at regular intervals will help everyone involved focus on their work and not needlessly worry about their standing. Everyone can proceed with confidence.